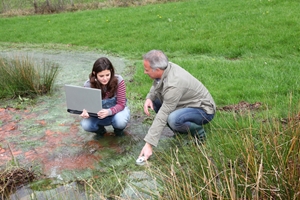 Rising groundwater levels are causing concerns across rural Victoria, as the extent of the area considered at risk from salinity has increased by 142,000 hectares since 2010.

Water monitoring by state authority Goulburn-Murray Water (GMW) revealed that the portion of land in Northern Victoria where the water table is within 3 metres of the surface had risen from 9,000 hectares to 151,000 hectares over the past four years, more than a 15-fold increase.

“If these water table levels get within two [metres] of the surface they become a real cause for concern,” said Carl Waters, manager of sustainable irrigation at the Goulburn Broken Catchment Management Authority.

Rising groundwater has been attributed to weather conditions over recent years. Fluctuating salinity levels have been recorded over several decades, peaking in the mid-1990s before dropping to a record low in 2009. Since then, water tables, and associated salinity issues, rose following significant rainfall in 2010-12.

“Current research confirms that rainfall on a wet catchment is the main driver of water table behaviour across the Shepparton Irrigation Region,” GMW Head of Customer Support Phillip Hoare explained.

“Now that more normal weather conditions have returned, it is important to continue monitoring to identify when and where groundwater pumping will be beneficial in minimising any salinity impacts.”

Mr Waters believes that mapping the rising water tables is important for the developing and implementing of salinity management programs. Tackling the issue will require efficient irrigation, surface drainage and shallow groundwater pumping.

“The balance and connection between all of these actions in the right places at the right time has been critical so far in our region and the community-driven planning for response has proven to be the key,” he said.

For those farmers working in the affected regions, mitigating salinity is a vital consideration. Investing in a low-cost and efficient water treatment system, like Hydrosmart, can be the solution to protecting plant health and minimising the impact of rising ground water.

Fertiliser Prices Through the Roof?
May 2, 2022
Recent Posts
Categories
Go to Top