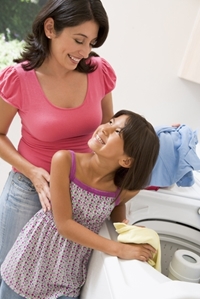 If you have noticed wash cycles in your dishwasher are no longer efficient, streaks are appearing, washing is dirty or scaling is occurring in your pipes and tanks, then you may have hard water.

Essentially, hard water is water that has a high concentration of dissolved minerals, which can cause constriction in pipes and taps, as well as interfering with the function of appliances.

The minerals in hard water often cause “scale”, which impacts on the water’s ability to react with soap and can cause poor wash quality. Scale is generally an accumulation of calcium, magnesium or iron inside of your pipes and appliances which looks like a white to rusty layer though it may also take the form of particles or grains. These prevent plumbing fixtures from functioning normally.

The build-up can greatly reduce the estimated lifespan of plumbing infrastructure, and so the prevention of scale is vital for ensuring that appliances, such as hot water tanks, washing machines and dishwashers, continue running for many years.

Fortunately, there is a solution that can not only remove scale build-up, but will also provide ongoing prevention without the need for expensive filters or chemicals.

Hydrosmart technology prevents dissolved minerals from bonding together to form crystals. Resonance frequencies are generated through a computer controlled system, and an electromagnetic field is passed through your water to actively break down the bonds within existing scale that is downstream of the Hydrosmart system.

Following installation, pipes and equipment that are connected to the treated flow become scale-free, as build-up is removed. Afterwards, further build-up is prevented.

A Hydrosmart system can be any size, large or small, to fit any existing water infrastructure, making it the ideal solution for both domestic and commercial use. Water flow rates are not affected and any existing implacement will suit the technology.

Additionally, lawns and gardens are significantly improved with a Hydrosmart system. The technology benefits plants by overcoming salinity effects and by delivering minerals and nutrients to roots more efficiently.

Iron in Your Water – Advantages and Disadvantages
February 11, 2022

What are the health benefits of scale removal?
February 11, 2022