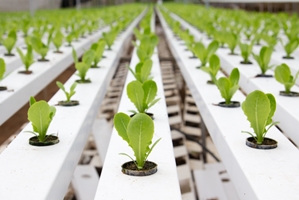 In a country that struggles with water supply like Australia, it might seem counterintuitive to turn to hydroponics – a technique that grows plants in water, not soil.

However, this strategy actually uses less water than traditional agriculture, which is one of the reasons it’s on the rise. At the same time, the success of these endeavours depends on having the right quality of water. That’s where Hydrosmart comes in.

According to industry research firm IBISWorld, hydroponic crop production has grown considerably in Australia over the last five years, with investment fuelling higher yields and productivity. The report predicted revenues to increase 7.2 per cent annually from 2009-10 through 2014-15.

Farmers have found the technique to be a strategic way to overcome unfavourable climate conditions because they have greater control over the crop environment and use water much more efficiently – consuming only about one-fifth as much as they would growing plants in soil.

With demand for hydroponic produce surging, the industry is expected to enjoy revenues of about $816.6 million in 2014-15.

Of course, maintaining hydroponic equipment and raising healthy plants depends heavily on water quality. According to Practical Hydroponics & Greenhouses, your water source can have a “major impact upon the management of your system”.

In particular, scale and build up from minerals in hard water can block drippers. Furthermore, water must be able to dissolve nutrients and carry them to plants, while high salinity can become toxic to plants if it reaches excessive levels (as it often does in Australia).

Compared to reverse osmosis systems, Hydrosmart’s technology requires significantly less maintenance and doesn’t generate a waste stream. Since one of the advantages of hydroponics is its efficiency, it only makes sense to treat water in a way that gets the most out of water supplies.